“Where do you suppose we go from here?” We ask the hotel receptionist, whilst staring absentmindedly at the large map of Iceland that hung ominously over the brick facade.

The man suggests we make like the child of Kanye and head north west, which coincides with some of the sights we were hoping to see. The only other alternative was to head towards Vik, a small town on the southern sector of the island which houses many filming locations for Game of Thrones, as well as one of the infamous ‘black sand beaches.’ A flaw in that plan was that it was a 5 hour drive away… not desirable.

After a brief consultation with Google Maps, we were pretty satisfied that we could make a full day of circumnavigating western Iceland, so we once again hit the road. The journey would take approximately 2 and a half hours to get there, not including inevitable pit stops after my many hunger complaints. Unfortunately for Ruby (and my nerves), she was the only person insured to drive our rental car, so she’d be taking the reins on this road trip.

Before we hit the road, we decided to take brief detour through the Reykjavik, realising that in our pursuit for the Northern Lights, we had not seen any of city itself. Our only planned stop was at Hallgrímskirkja, a Lutheran parish that dominates the Icelandic skyline. The building is one of the largest structures on the island, and for a small fee, you can catch an elevator to the top and experience a panoramic view of the city.

The interior of the church was impressive enough, but I suppose it’s slightly difficult to appreciate the grandeur after visiting many of the London churches such as St. Marks Cathedral. Once we ventured upwards in the rickety elevator and those sliding doors made their way open, we were instantly blown backwards.

And we thought we were cold downstairs. At the top of the church, without the coverage of the surrounding buildings that we had on the ground, we completely exposed to the piercing wind and chilly breeze. The winds were so strong that at one point I fell backwards off of the platform facing the window. All of that discomfort, however, was trumped by our reward. A 360 view of all of Reykavik: trust me when I say it’s worth braving the harsh winds for… but not for too long.

Back on track with our road trip, we drove 30 minutes out town and came across a long toll bridge, at the end of which we decided to pop into first store we see and grab some food. In absence of a fast food joint (which are strangely scarce in Iceland; they actually don’t have a single McDonalds), we bought some snacks and Doritos to make my world famous ‘crisp sandwich.’ When we left the store, we were greeted with large spit-like globs of falling water.

And would you believe it, it was snowing! 5 degrees Celsius, on an otherwise sunny Icelandic day, and it was snowing. Naturally, we pulled off to the side of the road when it was safe to do so (Spoiler: it always is, there’s only 12 cars in Iceland) to snap a few pictures in the snow. 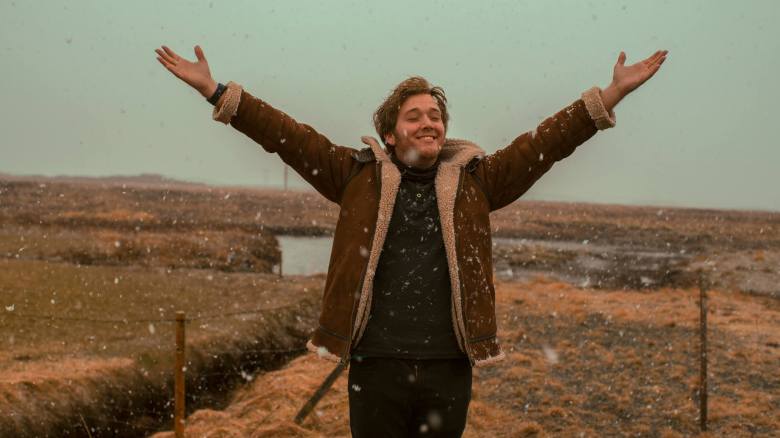 But there’s only so much time you can spend outside in the snow before you retreat to the warmth of your heated car. So we got back and drove. And we drove. And we drove some more. It’s a road trip, what did you expect? So we drove. And then we drove some more. And then we dr- HOLY MOLY WHAT IS THAT! Once we about 15 minutes from our destination, we saw a large waterfall off the cliff face to our right. That in itself was nothing special; waterfalls are abundant in Iceland, and just the day before we’d been skimming stones into the largest waterfall in the country. But there was something different about this one. I can’t really explain the majesty of it, and I don’t think that pictures really do it justice (no offence Ruby), so I’ll leave you with the address so that perhaps you can see it for yourself.

By this point, we were close to the national park, but the roads leading into it had been more or less destroyed by the recent weather. After remembering the importance that the car rental company gave us regarding off-road travel (e.i: don’t do it!), we decided to instead drive around to the other side of the park. This in turn led us to our first recommended destination, the local town of Arnastapi.

The first thing we notice in Arnastapi is a pod of whales in the distance. So what do we do? We chase the coastline, of course, trying to find an adequate vantage point. We drive through the small cluster of houses, down one way streets lined with log cabins and old swingsets, and through the ever confusing roads that seemingly lead to no where.

With the whales escaping our view, I stick the car in reverse and navigate empty town backwards and leave the town to find somewhere, anywhere, with a good view of the ocean. We stop off on the edge of a cliff and gaze out at the ocean, only to find that what we thought were whales was actually just the waves crashing against a submerged group of rocks. So that’s the story of our time in the quaint town of Arnastapi.

Disappointed with our lack of whale watching, we drove on to the next town on our itinerary, Hellsnar. Luckily, this stop was much more appealing than the last. Pulling up alongside a group of other travellers in a carpark perched over the seaside, we were happy to discover that the sunny weather the most splendid it had been the entire trip. With the sun shining, we ventured into Hellsnar wearing nothing but a t-shirt.

TIP NUNBER 5: DO NOT WEAR A T-SHIRT IN ICELAND.

Just because the weather looks warm, doesn’t mean it will be. Too proud to go back to our car and put a jumper on, we walked down shivering towards the beach and stopped outside two large and ominous caves. Above both caves, a sizeable flock of seagulls filled the air with deafening squarks, as if to defend their home against invaders, but we made our way inside nonetheless. From inside these caves, we had a stunning view of beach with the shoreline of Hellsnar in the distance. Unfortunately, the caves provided a little too much shelter from the warmth, and with only a shirt on my back, I was becoming concerned that I would freeze to death within moments.

After feeling satisfied with our time in Hellsnar, we continued along our journey West, eventually arriving in Djúpalónssandur, more commonly referred to as the Black Lava Pearl Beach. With it’s black pebbled floor and landscape formed by lava, Djúpalónssandur is unlike any beach I have ever come across. The beach has a rich history; what once was the home of the most prolific fishing villages in the area, the bay is now abandoned.

Amongst these black pebbles lies the wreckage of the Epine, a British fishing trawler that shipwrecked along the coast on almost 70 years ago. Unaware of what the iron pieces of the ship actually were, I had assumed they were parts of a crashed plane my dad had told me about before I left. Of course, my father was referring to the abandoned American Navy DC plane that ran out of fuel and landed on the Sólheimasandur black sand beach 45 years ago and remains relatively untouched to this day. I’d also foolishly mistaken the beach to be one of Iceland’s famous ‘black sand’ beaches, which was what drew me to it in the first place. In fact, it wasn’t until writing this blog that I have found out that, no, that wasn’t the former US warplane and no, we were not standing on a black sand beach.

The beach is flanked by two small lagoons, Svörtulón (meaning Black Lagoon) and Djúpalónssandur (Deep Lagoon’s Sand), the former lending its name to the beach itself. The Djúpalónssandur was originally thought by early settlers to be abysmal as it was so deep, which adds an eeriness to the already haunting atmosphere. There are supposedly great walking paths nearby, which are fairly visible when you scout around the lagoon, however our time was running thin which prevented us from seeing more of what the area had to offer.

The weather on this part of the island had grown increasingly unpredictable. In under an hour, we’d driven through rain, snow, harsh winds, blistering sun, total darkness caused by cloud coverage, more rain, wind so strong it nearly blew us off the road, and then more sun. In Iceland, you can experience a years worth of seasons in just a day.

The day was beginning to draw to a close, and we had a long drive back home, coupled with the fact that we were already exhausted from the previous night Aurora Borealis hunting. We’d both made a decision to drive home, and perhaps see a bit of the local night life. Venturing back home a different way we had driven, we stop into a nearby town for a late lunch. Walking up to a local, we ask where he recommends we eat.

“I suppose you can eat here, or there” he said, pointing in the direction of two buildings either side of the road.

“Oh, so why do you choose those two restaurants? Do you like the food, or is it just cheap?”

“Well…” he paused, “those are the only two restaurants in town”.

The choice was hard, but we eventually settled on eating at the restaurant closest to us because we were too lazy to cross the street. However, luckily that choice was a rewarding one. We sat in a so called ‘Lord of the Rings’ themed fish and chips shop (although the homage to Lord of the Rings stops at the name and a small Frodo Baggins mural on the wall), which after writing in the guest book we were surprised to say opened the day before. We chatted for a while until about 4pm, but unfortunately it was getting late and we only had another 6 hours of daylight left (that’s meant to be a joke, but we did need an excuse to leave).

The drive home was indeed long, but it was still daylight long after we’d arrived back at our guesthouse, so after freshening up we headed out for a night, or more appropriately, day on the town.  We had quite an early flight the next day, so our night would have to be a short one, so we decided on a single bar to visit; The Lebowski Bar.

Named after the titular protagonist in the cult classic The Big Lebowski. This bar features the only drink you can ever want… The Dude’s favourite drink, a White Russian, served over a dozen different ways. You can have it with caramel, or strawberry, or chilled, or warm. The possibilities are endless, despite the fact I only listed four options. However, in proper Dude fashion, I ordered it as the standard ‘milk, Khalua, and vodka’ way. Like everything in Iceland, it didn’t come cheap, but watching drunken people play movie trivia whilst sipping on a milky beverage was the perfect way to cap off our short trip to Iceland.

One thought on “Reykjavik Roadtrip – Our Journey to the West of Iceland.”